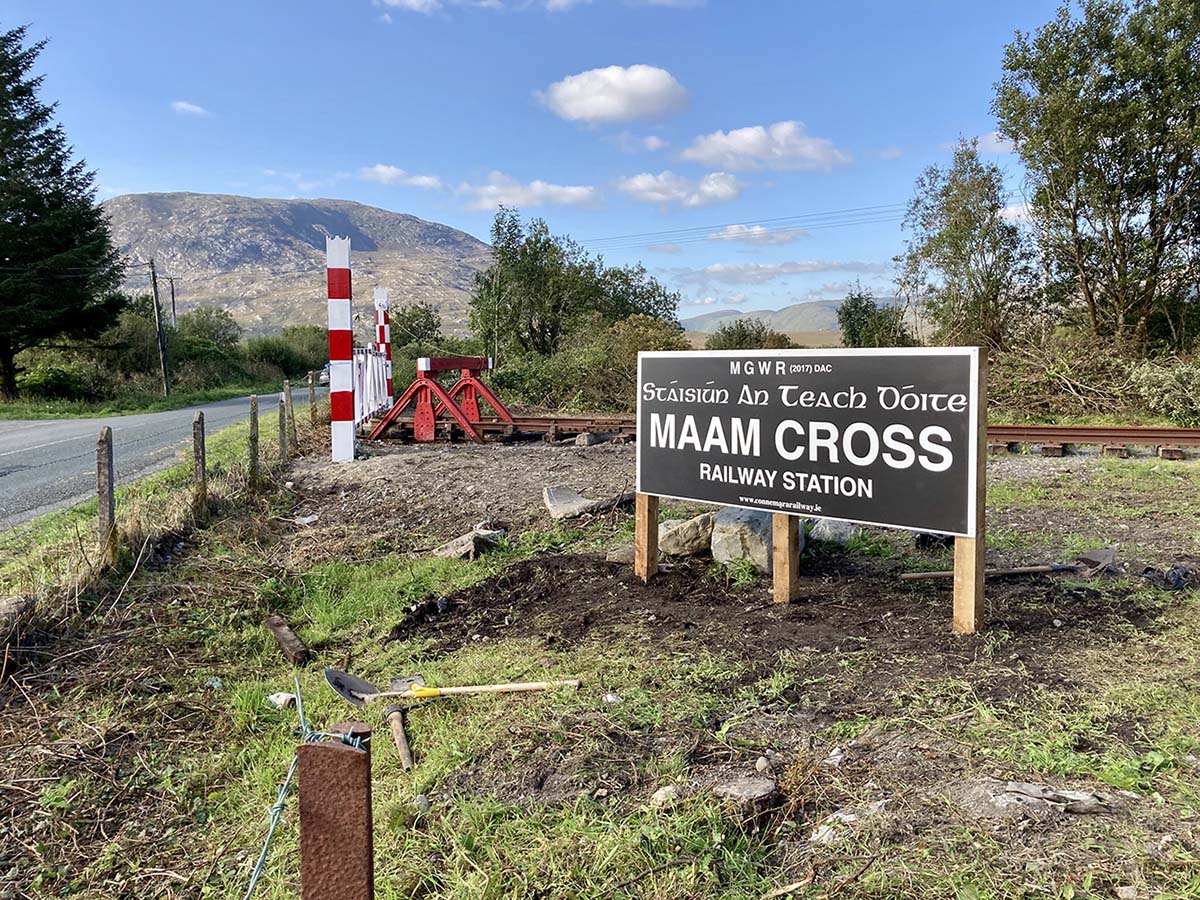 23/05/2020 As per the Government Road Map re Covid 19 we were able to reopen our site at Maam Cross to continue (voluntary) work to bring trains back to Connemara.
Currently, we are constructing a temporary’ Pop Up’ 3’ narrow gauge railway to allow us to run a train this year – the 125th anniversary of the opening of the Galway to Clifden in 1895!
Read more.. Maam Cross station opened in July 1895 to serve the vast hinterland of the Maam Valley and Joyce Country to the North, and Carna, Rosmuc, in South Connemara. The Clifden extension , of which it was one of the intermediate stations, was one of what were known as the Balfour Lines – built with government assistance to open up the remote far west of Ireland and stimulate economic activity – in the so called ‘Congested Districts’.

In 1925, like most railways in Ireland ( Irish Free State ) the MGWR was absorbed by the new Great Southern Railways. The early years of the new GSR was taken up by repairing the extensive damage wreaked on our railways by the War of Independence and more particularly the Civil War. The 1930’s dawned with worldwide depression. Retrenchment and decline soon forced the GSR to close its most uneconomic route and the Clifden line was one of three former Balfour lines to go – closing on April 27 1935. By 1938 the track had been lifted and soon after went through the formal abandonment process.

Maam Cross station lay forlorn and unused until the early 1960’s when the station buildings on the up platform were demolished and large sheds erected – to house a seaweed factory, this operation lasting until the early 1970’s when it too closed down. Since then the site has been used for storing such diverse materials such as wool and building materials.

The new company’s plans include reinstating railway track along the approximately 400 metres of available trackbed with associated trackwork largely in keeping with the original layout. Refurbishing the platforms, rebuilding the signal cabin and down platform waiting shelter, restoring the Goods Store, and replacing the water tank. The existing yard entrance gate will be replaced by replica of the original pattern which seems to have been unique to this branch of the MGWR. An appropriate level crossing gate will also be erected on the site of the original within the site boundary.