”
There are plans to launch the Connemara Railway project in western Ireland later this year with steam.

Promoter Jim Deegan said they had laid 1,640 feet of 3ft-gauge track at Maam Cross station, which closed in 1937 when the 48-mile Midland Great Western Railway branch from Galway to Clifden was axed. He said: “The aim of laying this temporary track is to facilitate a ‘pop-up’ railway in order to run a steam train in Connemara in the next few month
” 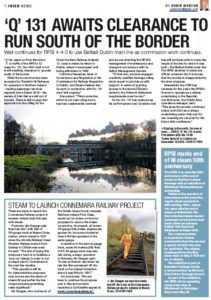